Hello all! I've recently discovered that my schedule will not allow me to attend any tournaments this month (February), and as such, I get a full month of playing with my new models and learning how they work!
I'm VERY excited about the new Wolfsworn theme force. I had been running a Grayle list for my more casual games, on and off. I've said things like, "if we get a theme force, this list will be legitimately competitive in tournaments." Whereas that's as yet largely untested, I've had some really fun games with the list so far.

This report will have a mini-report (no pictures, just a brief recap) of a game vs. Trolls, directly before the "feature" report, where I have pictures and everything!
Read more »
Posted by Xaereth at 11:55 AM No comments:

Howdy everyone! I've got some battle reports here for you, in the context of an annual team tournament we have in Denver every year. It's called "Store Wars", and each game shop in our area puts together a 5-player team to compete with the others. I played in this tournament as my last act in MK2 (albeit about 1.5 years before the actual end of MK2), and had the worst tournament result of my life (I went 0-3). No matter that there were a some really crazy (unlucky) things that day... I still did a very poor job overall. No reports for those games, since I was on my way out of the hobby at the time, but suffice it to say that as a competitive player, it's one of my more embarrassing moments.

Ironically, my team still won the event, and I got a trophy that I didn't really earn. This time, I hoped that I could redeem myself in my own eyes, and actually be a help to my team.

This post will be more for my own records than anything. One of the perks to writing a battle report blog is that I get a tangible reminder of events in the past. I tend to be very nostalgic, and being able to relive old games and events is a really fun thing for me. I want to have this post for my own sake later in life, where I can see all the tournaments I played in one year and see how things went.

I don't expect that anyone else really cares about my past games/tournament record. It's not for self-aggrandizement. Whereas I certainly have an ego (as does everyone, to some degree), I don't really care to beat other people over the head with my accomplishments. I have other ways to stroke my ego if I want to do that. Still, if this sort of thing isn't something you're interested in reading, don't do it. Simple as that. :)

Warmachine Battle Report 49: Baldur1 and Krueger2 at a Steamroller, 75 points


Hello all,
Another month, another tournament for me. I get to go to about 1 or 2 each month, depending on what the wifey lets me do.

This was another event at my old stomping grounds, Gryphon Games and Comics in Fort Collins, CO. I've been doing pretty well at each event I've been to since I've gotten back into Warmachine, but this event was going to be a little rougher than usual: I was kind of forced to bring Krueger2 instead of Tanith (because Tanith and the birds are all out right now getting painted).

Warmachine Battle Report 48: Baldur1 and Tanith at a Steamroller, 75 points


Hello all, another tournament report for you today! I've been playing very little lately, and the games that I have been playing have been somewhat silly affairs, mostly including Krueger2 and the Celestial Fulcrum.
However, I wanted one more shot at Tanith + Baldur1 in ADR, so that's what I took. I hadn't played either list since the LAST tournament in November. That meant I'd be a little rusty, but I wasn't too concerned.

(that isn't to say I should have been concerned, just that I wasn't, haha!)

Let's jump right into it!

Warmachine Half-Reports: A Couple Tournament Reports without much detail

Hey folks! I've mentioned these tournaments a few times now. There are a few events I've attended recently that even took pictures for, but didn't really have time to write reports for. Because I don't want to lose the pictures, I'm mostly just posting these up as half-reports. Please don't expect anything approaching my normal depth of analysis or detail in these. Mostly pictures with a few sentences here or there to set the context.

Hello all, it's been a while since my last post. Like, 2 months or so. Who knows if it'll be that long again until I post again. Life has been very busy, with mandatory overtime at work and other stuff. I have been taking the time to play games, I just don't post about them on this blog. Not lately at least.

During the time I was gone, I've played 3 tournaments. I'll probably do some sort of picture/info dump on the first two tournaments, since I don't want to lose those photos. I even got 3rd place at a tournament with a Grayle/Krueger2 pairing. HA!

However, I've really been looking forward to the "Dessert of Daggers" event held by my friend Josh Nordstrom at Gryphon Games & Comics. I think the name came from back in the day when the Feast of Blades (big local con) was in October, and this was the follow-up tournament. It's Gryphon's premier tournament of the year, with lots of cool prize support and a low entry fee.

This was likely to be my last semi-large tournament of the year, what with the holidays coming up. So, I brought my best. Yes, you guessed it: Baldur1 and Tanith in ADR. 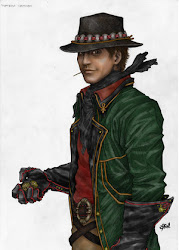 If you have questions, or want a list critiqued/created, or just want to say hi, feel free to email me at atrixaereth at gmail dot com.

Be forewarned: if you don't tell me you don't want it on here, it might show up on the blog, though I can keep it anon if you want =]